Knee Replacement and the Long Road to Recovery 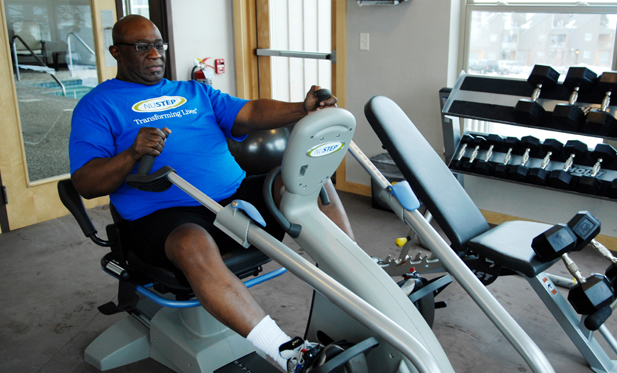 I’d like to think my knee problems were a result of many seasons dominating on the football field, and while that definitely contributed, my real issue was the hundreds of pounds of extra pressure I placed on my knees for years.

Prior to losing the weight, I had arthroscopic surgery on my knees several times, but it wasn’t helping. My doctor informed me that knee replacement surgery was the only thing that would work, but I had to lose a lot of weight to be eligible.

Instead of using that as my wake up call, I let myself live with the pain and discomfort for years. When I arrived on The Biggest Loser Ranch my knees were so bad, I couldn’t use traditional cardio equipment like the treadmill, bike or even the elliptical.

That’s when Bob put me on the NuStep and I discovered my new best friend. A daily workout regimen on the NuStep, combined with work in the pool, provided amazing results.

After the show concluded and I had lost nearly 170 pounds, Dr. H from The Biggest Loser set me up with a surgeon in Los Angeles and I finally had my first knee replacement. A year later, almost to the day, I had my second one done.

Immediately after my first knee replacement I was using NuStep as a large part of my therapy. It was like being on the Ranch, but now in rehab mode. My usual workout on the NuStep is very intense, but in therapy, I had to use the machine differently. I had to take it easier to get my strength back and heal properly.

One day at therapy, I was speaking with a man on the NuStep next to mine. He had recently had a stroke and also loved the machine. Even though he had trouble with movement, he was able to use it with the assistance of the Leg Stabilizers and WellGrip® equipment.

That’s the great thing about the NuStep though – it does not discriminate! Whether you’re healthy and strong, in rehab, or have a disability, it’s a great workout. It got me through major weight loss and rehab and is still part of my daily exercise routine at home and my lifelong journey for health.