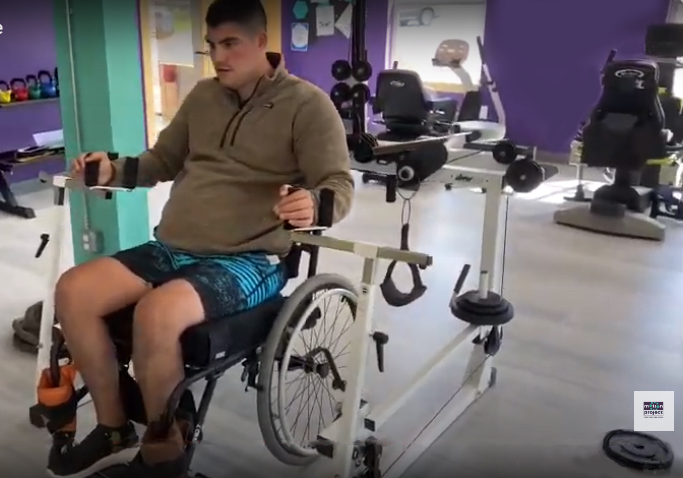 When we hear the word paralysis, we think of a lack of body movement. If the body is paralyzed, it is immobile and can’t move. And some may think that once a person is paralyzed, exercising and moving the body aren’t important. But our bodies were designed to move.

So why wouldn’t movement and exercise be the exact thing that somebody who is paralyzed need to do?

Society puts so much emphasis on the able-bodied community to eat right, exercise, and go to the doctor to maintain their overall health and wellness. Shouldn’t that be even more important for people with paralysis?

Typically, when a person is recovering from an injury that requires physical therapy, they spend a prescribed amount of time in rehab and then they are discharged.

But what happens when someone has had a severe injury, like a spinal cord injury (SCI)? They may need much longer — even lifelong — rehabilitation.  And yet, SCI patients are often discharged from therapy before they are ready. Then what happens? They go home, stop moving and become sedentary.

On top of that, the NSCISC reports that since 2015, about 30% of people with SCI were re-hospitalized one or more times during any given year following injury. Most of these re-hospitalizations were due to secondary complications resulting from lack of movement and a sedentary lifestyle. Our bodies are meant to move – whether we can move them ourselves or not!

NSCISC also notes that life expectancy for people with SCI has not improved since the 1980s. In fact, they remain significantly lower than people without SCI. Pulmonary and respiratory problems are an especially serious medical complication because they can lead to pneumonia; the number one cause of death among individuals with SCI.

Second, if insurance companies won’t provide longer rehabilitation or increase the length of hospital stays, then we need to offer programs and create spaces where people with disabilities can exercise after their rehab ends. We need more universally designed/accessible gyms and they should have inclusive fitness equipment.

Our Bodies Need to Move

Maintaining movement can help prevent the type of secondary complications so common for those with SCI.

That lack of movement decreased my muscle tone and strength. I also experienced secondary complications like frequent urinary tract infections (UTIs), chronic pain, and depression. I was hospitalized multiple times and nearly died from pneumonia twice.

Eventually, I realized how all of this was preventable. I just needed to exercise and move my body. And I knew I wasn’t the only one who was experiencing this. That’s why I started my recovery center; to fill this gap in my community here in Western New York.

Exercise and movement provides many benefits for people with paralysis. It improves mood, increases physical function, supports independence and so much more. And, most importantly, exercise and movement contribute to a healthier, better quality of life.

I hope that in reading this it will motivate you to find a way to exercise and move your body. It doesn’t matter if you have an exercise specialist. A caregiver, a family member, or a friend can help…let them help you. Let’s start a new conversation and start talking about health and wellness instead of just rehab. Moving should be lifelong, and not have a beginning and an end. Together we can move!

Natalie Barnhard, PTA, LMT, is the president and founder of Motion Project Foundation, a non-profit organization in the Buffalo, New York area. Motion Project provides financial assistance for individuals recovering from a spinal cord injury, traumatic brain injury and neurological disorders. A wheelchair user since she sustained a spinal cord injury in 2004, Natalie is also the founder and executive director of The Natalie Barnhard Center for Spinal Cord Injury Rehabilitation and Recovery.