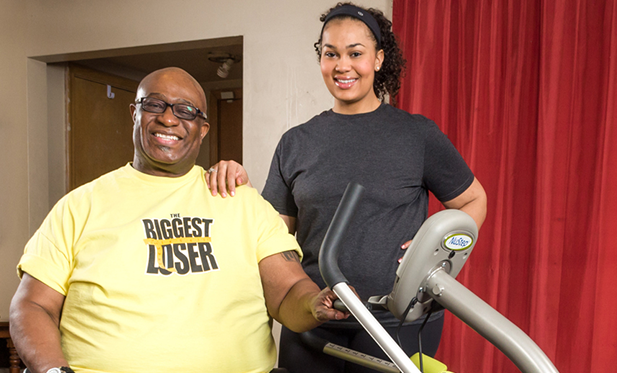 In this week’s blog, I’d like to talk about something that is very important to me, other than my faith, my bride and my family.

It’s my NuStep! I am sure my readers are wondering how a tough guy like me could have a soft spot in his heart for NuStep?

Some of know my story and some of you don’t. It’s important enough for me to write about again.

I was on The Biggest Loser, in the fall of 2009, until May of 2010. Before I went on the show I had been living my life with terrible knee pain and I had trouble with my joints.

I played football and I wrestled in high school and in College. I also was active in these two areas of fitness while I was in the army.

While I was serving my country that I love, I came to the realization that my body had taken a beating. I was a Paratrooper and I performed more jumps then I can count.

All of those years of stress I had put on my body, combined with the fact that I had become obese, left me with joints that weren’t in the best shape.

My knees were very tattered and torn. So when I got to the ranch on The Biggest Loser and saw the NuStep, it was love at first sight. My trainer Bob instructed me to use the NuStep and it’s been a match made in heaven ever since.

My life adapted to a regimen of NuStep cardio and swimming, while I was on the show. I have been using the NuStep for seven years and I am still going strong.

NuStep was designed to enable as many users as possible – regardless of age, or ability level – to Take That Step toward a healthier, richer, longer life.

Thanks and I’ll see you next week!

This Week’s O’Nealism:
“Mental fatigue will set in way before physical fatigue, push through it.”